When it comes to the most successful brands in garment industry, Zara – a Spanish fast-fashion company of Inditex Group, is definitely a “must have” nominee on the top list.

Founded in 1975 by Amancio Ortega and Rosalia Mera, Zara now has had:

Daniel Piette – Chairman of Louis Vuitton Fashion, once described Zara as “possibly the most innovative and devastating retailer in the world”. 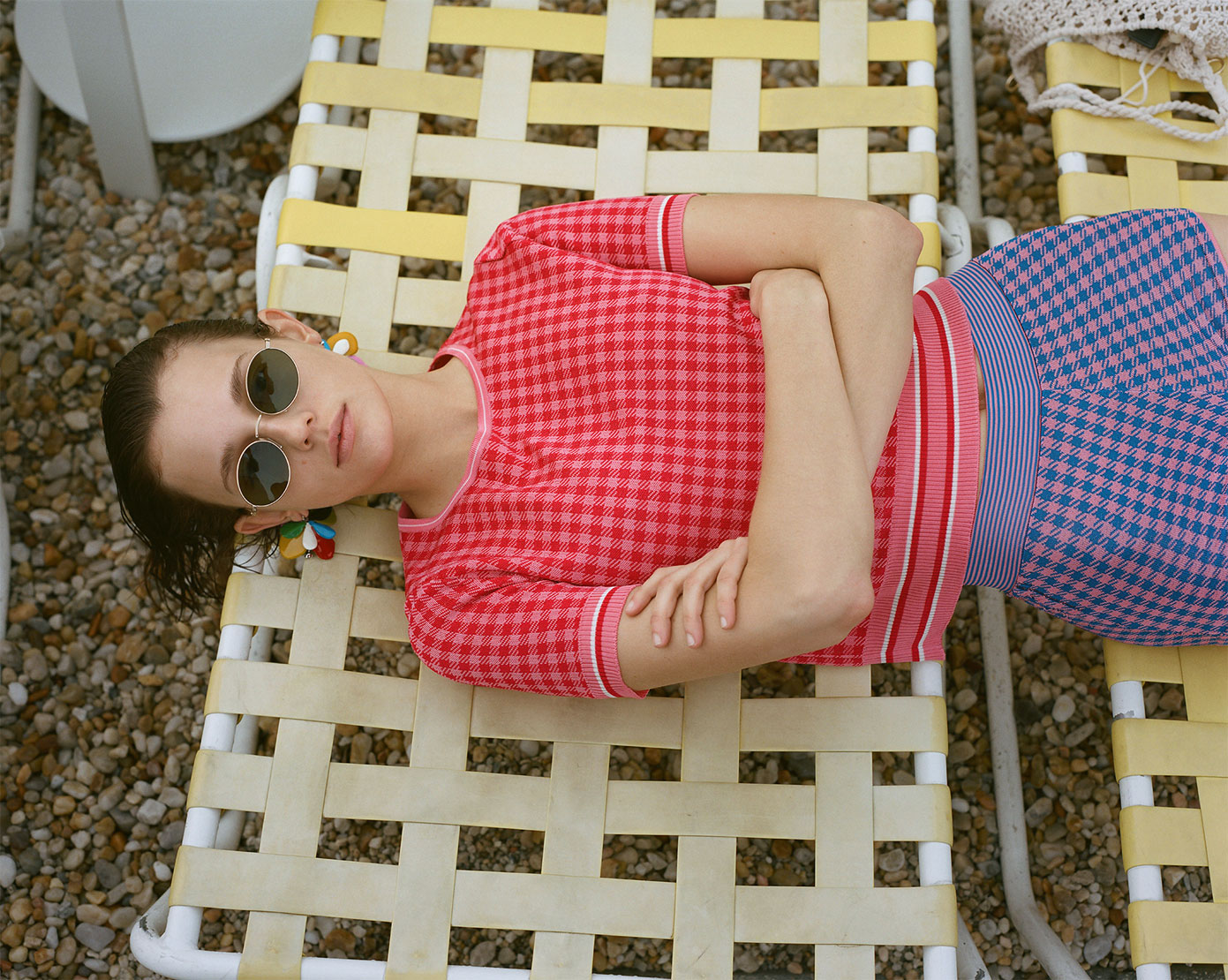 So what is Zara’s secret recipe for growth? In this article, we will walk you through 5 Zara’s tactics, from their production process to distribution management, and give some takeaways which you may learn to take your business game to the next level.

If you’re in the search of products to sell online that really get sold, enjoy our bonus here:

Concentrate on in-time production and distribution

1. Take control of production to create scarcity for every style

For the most part, a traditional retailer tends to outsource all of its production in order to focus on distributing and selling those goods. This is because the global apparel industry is “highly-labor intensive”, which requires a lot of manufacturing lead time and people involved in.

Many rival counterparts of Zara such as H&M, Gap, etc. now are seeking to lower costs by outsourcing production to developing countries, whose wages of labor are relatively low.

However, the disadvantage of this method is that it lacks the flexibility in the production process because it is forced to place production orders to manufacturers overseas at least 6 months in advance of the season.

Staying out from the crowd of its competitors, Zara produces 60% of its own products. The company mainly relies on its own design team, complex fabric sourcing, cutting, dying and sewing facilities at the headquarter in Spain. 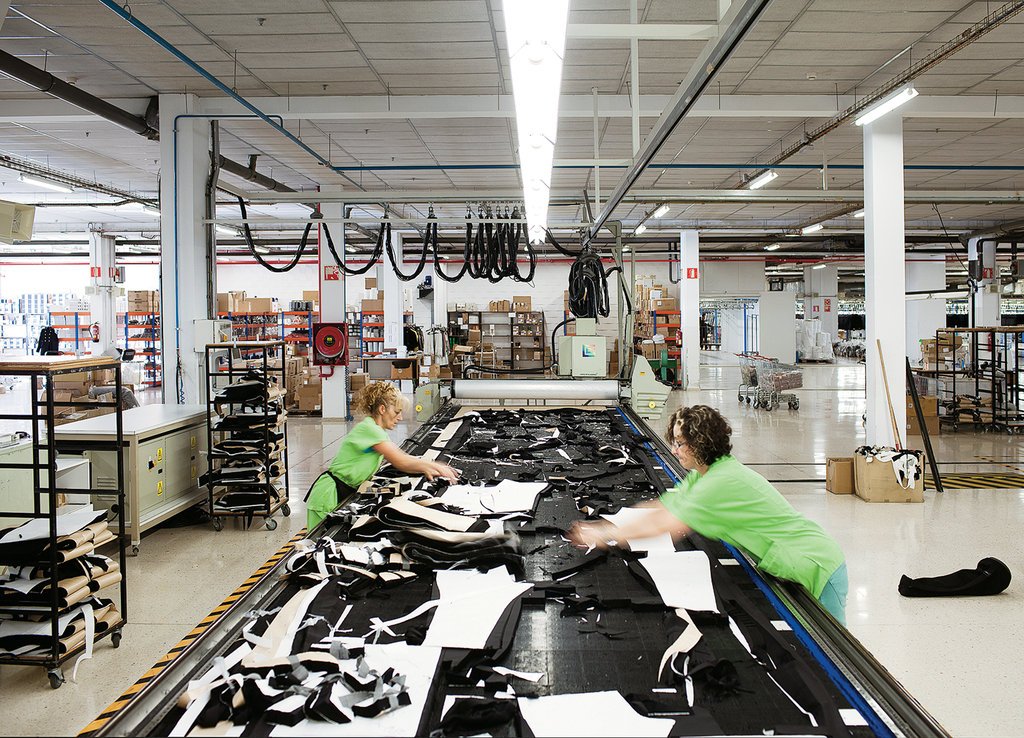 In-house production enables the business to be flexible in the amount, frequency, design and variety of the new styles they produce. It also helps create a rapid product turnover since the manufacturers can easily keep a close watch on the production process and strictly control inventories as well.

The company has the ability to come up with a new style and have finished goods in its stores in four to five weeks and also modify existing items in less than two weeks. During the first week, if a design does not sell like hot cakes, it will be withdrawn from stores immediately, further orders are called off and a new style will take up the place. 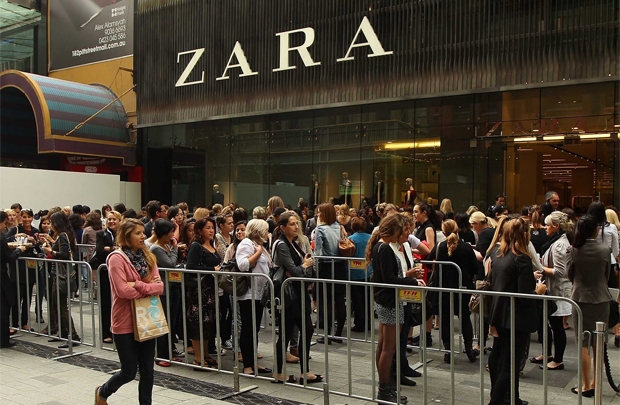 As a result, this rapid product lifecycle naturally creates an urgency and scarcity for Zara’s retail stores, which increases the chance of each consumer to visit the stores and buy the products.

A typical fashion shop in Spain just expects one customer to visit three times a year. For Zara, it goes up to 17 times!

When Zara introduced its first store on London’s Regent Street, many shoppers browsed without buying at first, thinking that they would buy at another time, let’s say during a sale. Then they are explained that the styles would be changed every two weeks, and the old styles would very likely not be available later. This made the shoppers not be able to resist putting their favorite items to cart right at the beginning. Afterwards, Regent Street became one of Zara’s most lucrative stores and more Zara stores opened in the UK.

Although the wages of their European workers are roughly 5-7 times higher than those of their developing-world counterparts, the turnaround time is totally worth it. 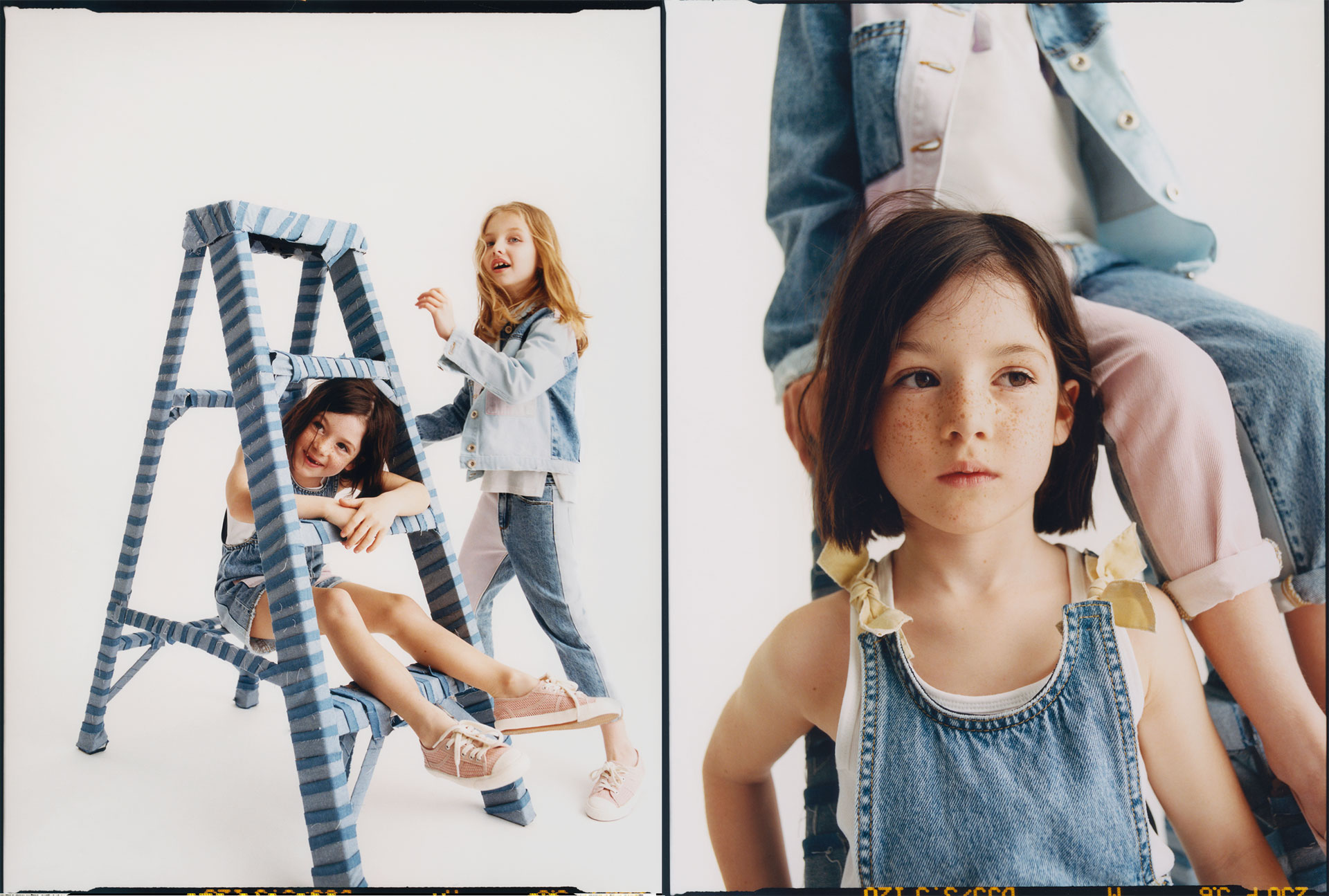 2. React at the right time rather than forecasting for future

Zara is one typical example of the businesses who truly understand and tailor their customers. The company focuses on responding to actual fashion needs rather than forecasting fashion trends for a distant future: 85% of its production is done during the season, which allows the chain to constantly offer very up-to-date styles. 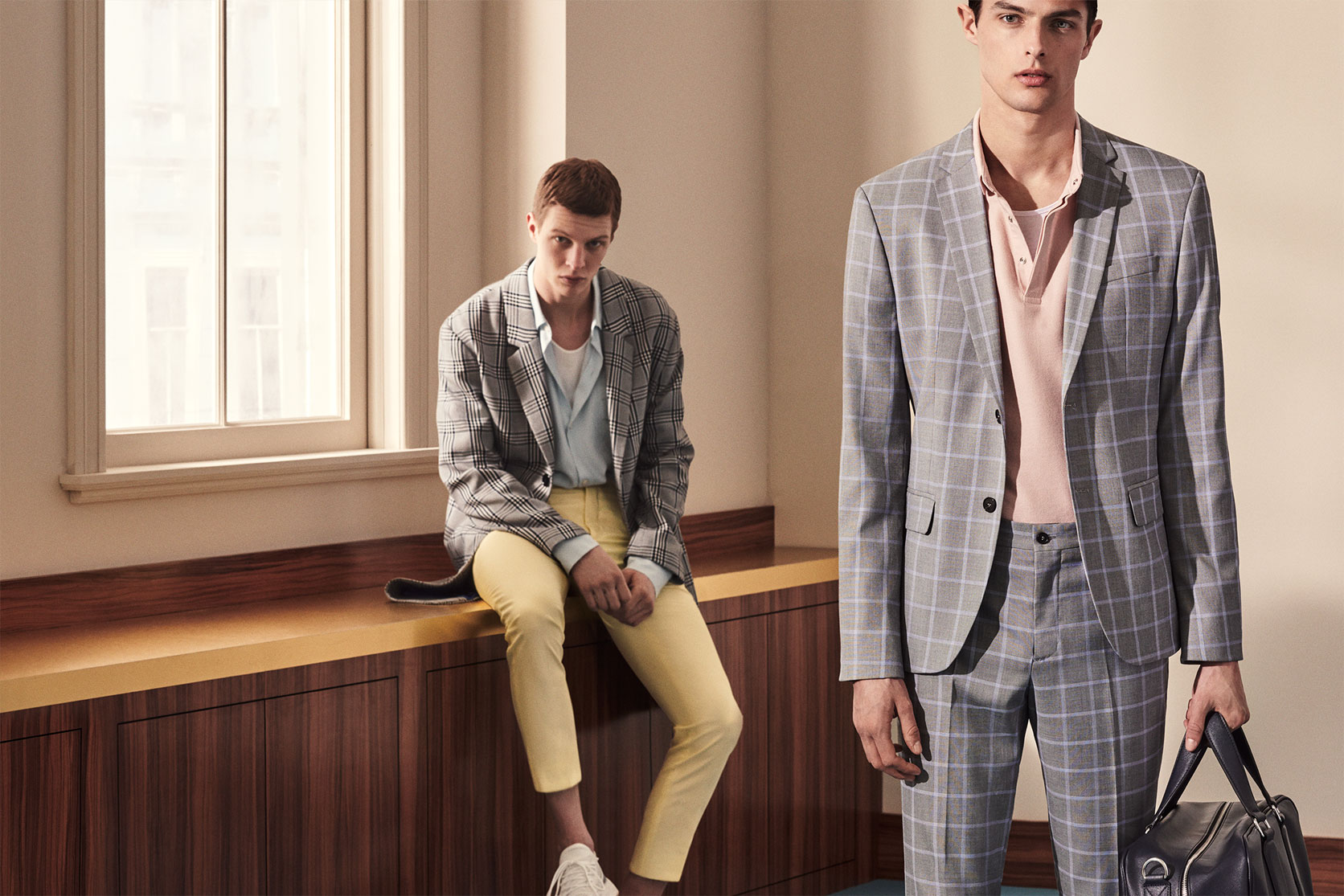 With its shorter response times, the company assures that its stores provide clothes consumers want at the right time. Zara can move from identifying a trend to having clothes on its shelves within 30 days. That means Zara can quickly identify and catch a winning fashion trend, while its competitors are struggling to catch up.

The entire product development cycle begins with market research. This combines information from surveys and interviews conducted on university campuses, discos, and other music venues to find out what are all the rage at the moment, from daily feedback from the stores, and from the sales reports. If a style or design becomes the in thing on the street, Zara gets to work. Store managers usually ask for customer feedback on what shoppers like, what they dislike, and what they’re looking for. That data is instantly sent back to Zara’s designers.

Designers sketch upon customers comments or even a new style that a customer might be wearing which could be replicated for Zara’s stores. These necessary information can be hardly fought out in all of the traditional daily sales reports. 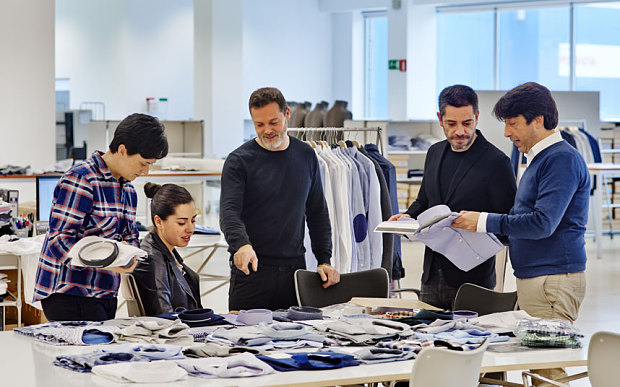 Rather than putting all the design burden on a single designer, Zara developed a strong in-house team of designers on their own, who began developing clothes based on popular fashions, while at the same time producing the company’s own designs. The team based in A Coruna in North West Spain is busy all year round, finding the outstanding fashion trends, and inventing new styles to match the trends.

Each year Zara launches 10,000 new styles, compared to 2,000-4,000 for H&M and GAP respectively. The heavy workload of 1,000 new styles every month is managed by a design and development team of over 200 people. It means each person has to be responsible for producing around 60 styles in a year (or 1-2 styles a week).

With new styles being developed and introduced frequently, each style would contribute only around 200k-300k sold items to the company sales, which is a far lower than other brands, and certainly not cost-efficient in term of design and product development. However, the higher profit margins will be an adequate compensation for the company.

Just like that, rather than forecasting the future trends as other competitors did, Zara quickly produces a small amount of what is hot with consumers, and move to the next trendy style fast. With its range of clothes constantly being updated, one of two slow-selling items are unable to hurt company’s profits. Customers are also more likely to visit its shops regularly to see new stock. In fact, Zara holds 6 days worth of inventory, while H&M holds 52 days and GAP holds 94 days of inventory. 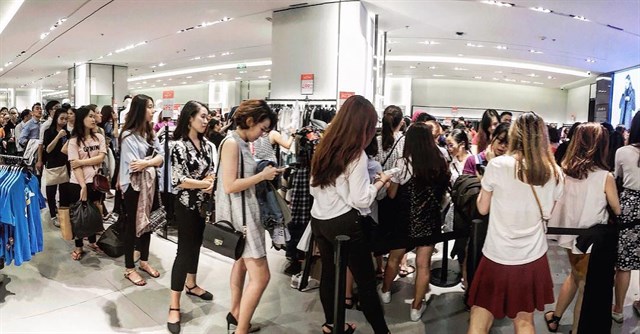 On the other hand, Zara even puts its forecasting effort on the type and amount of fabric it should be purchasing. This is an incredibly smart strategy, since fabric (raw materials) mistakes are always cheaper than finished good errors, and the same fabric could be turned into many different garments. Zara also buys semi-processed or un-colored fabric that it will be able to be colored up later, based on the actual need in the market.

Apart from its ingenious product development, Zara also owns one of the most state-of-the-art distribution systems across the globe, with minimal human intervention.

Approximately 200 kilometers of underground tracks move merchandise from Zara’s manufacturing plants to the 400+ chutes, ensuring each order reaches its right place. Optical yet automatic reading devices sort out and distribute more than 60,000 items of clothing an hour. Zara’s merchandise does not have to waste time waiting for human sorting. 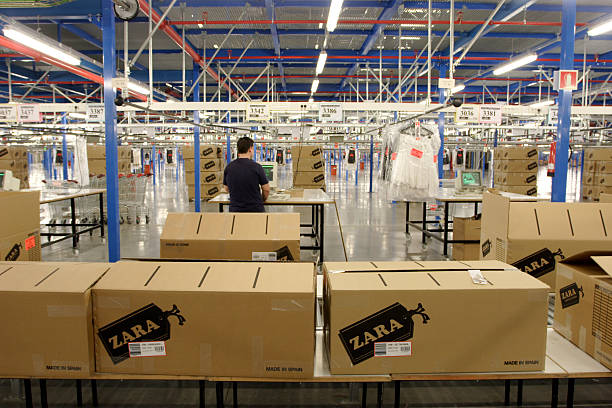 Moreover, Zara’s production centralization gives the company a competitive advantage by minimizing the lead-time of their goods when it comes to the product distribution. This is cost-effective due to the close proximities of the distribution center in Arteixo and their factories in Coruña.

In the distribution center, products are inspected and immediately shipped, since Zara’s distribution center is a place where merchandise is moved rather than stored. Then, to reduce the shipping time, the shipments are scheduled by zones and shipped by way of air or land.

Zara’s strong distribution network enables the business to deliver goods to its European branches within 24 hours, and to its American and Asian outlets in less than 40 hours. According to Nelson Fraiman, a professor who wrote a 2010 case study about Zara, the fast-fashion giant can get a product out from concept to shelf in just 15 days, while the industry standard is up to 6 months.

The takeaway: Enhance your shipping service, deliver products at the shortest time, outsource this if it’s necessary. No customer loves to buy from retailers who make them wait for days.

Keep cost down in a smart way

4. Not splurge on marketing but prime retail locations

Today, almost every fashion brand races to burn money on advertising on Facebook, Instagram, or other social media sites. Zara, however, chooses another way to go. It does not spend much money on social marketing but mainly concentrates on opening new stores instead. Their brave experiments have led them to be considered as one of the most innovative brands in the world.

What is more brilliant is, Zara relies mainly on its stores to promote their brand awareness. Yet the company has a department, which exclusively works in acquiring global prime real estate locations for its stores all over the world. 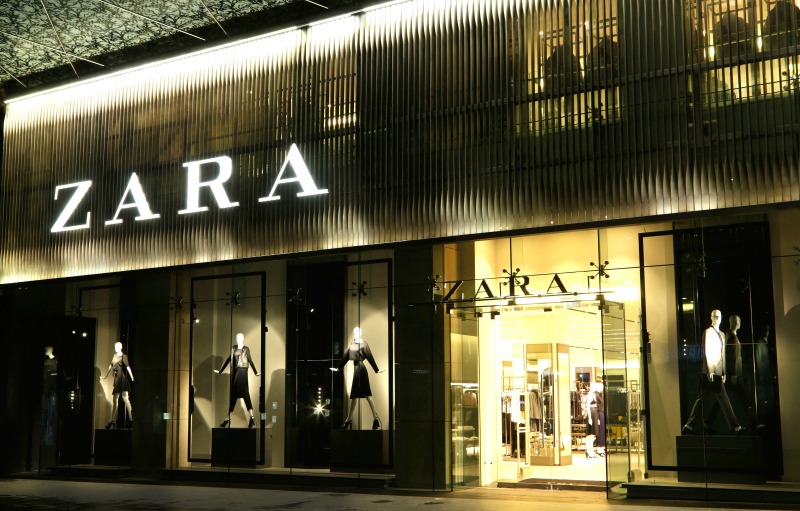 This department also takes charge of the frequent refurbishing of store layouts, as well as the creation of a stylish window display for Zara’s global stores. This strategy helps position Zara in the industry with a prestigious and elegant image.

The takeaway: Consider your store location carefully. Sometimes investing a little more in a prime spot can save a lot of money for advertisement in the long-run.

5. Keep learning and doing better than the best

Zara started out with affordable clothes, which are sometimes criticized for imitating other high-end fashion products. Certain of people think what Zara is doing well is to mimic rather than creating more new styles. “They have a premier look because they are often copies from the top designers”, said one industry observer.

However, Zara fashion is always hot and at a reasonable price, so customers are certainly voting with their wallets.

Thanks to thinking out of the box, choosing to handle in-house production and supply chain by themselves, Zara has successfully built a renowned international brand without any budget for marketing. The company has brought a new business model to the apparel manufacturing and industry, which allows them to not only instantly understand customer needs, but also react much faster than their competitors.

Even when you are reading this article, Zara has still kept opening on average 2 stores every single week. How incredible it is! Bernstein, an analyst at The Wall Street Journal once commented that this Spanish fast-fashion brand has the “best business model in apparel“. Sometimes going beyond the crowds helps achieve more success than it was thought.