A $400M Empire: How Poo~Pourri Turns Bathroom Odors Into Sweet Smell of Success

How do you make the world believe your poop doesn’t stink — or in fact that you never poop at all? With Poo~Pourri, it’s all possible.

The chances are high that you recognized this classy British lady from Poo~Pourri’s viral YouTube ad in 2013, “Girls Don’t Poop”. 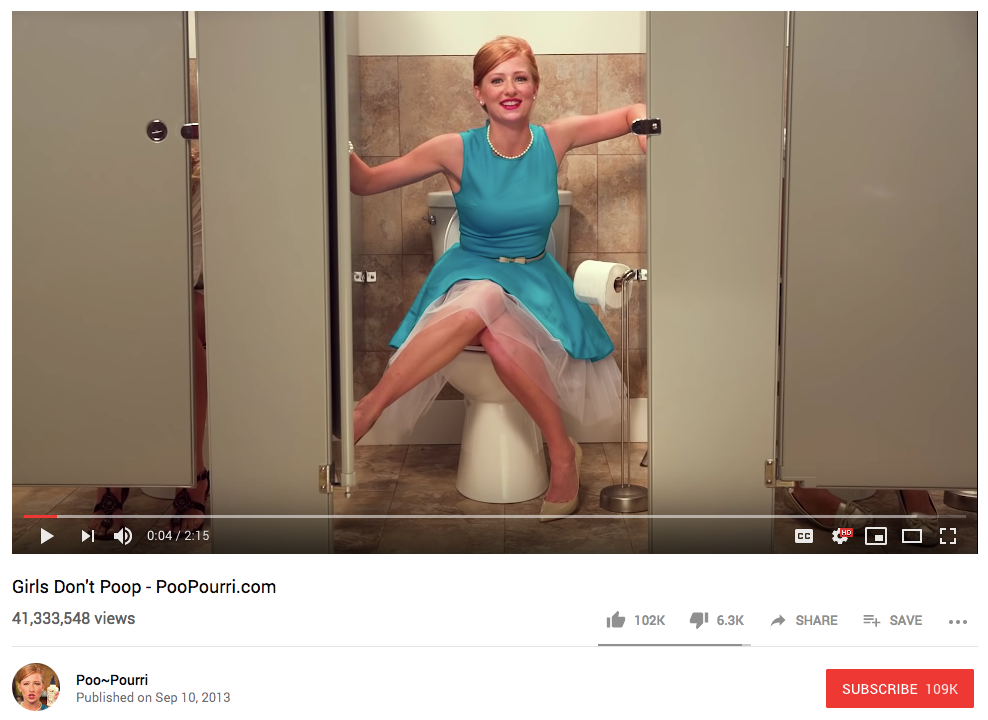 Since the launch of this video, Poo~Pourri made a splash on social media & did the impossible after half a decade of slow growth:

This impressive success encouraged Poo~Pourri consistently executed brilliant marketing over years and become the number one brand of bathroom products in 2018.

Today we’re going to show you EXACTLY how Poo~Pourri has grown from zero to a worldwide known eCommerce brand with the number of video views larger than some of Justin Bieber’s.

Who (or What) is Poo Pourri?

Poo~Pourri is a woman-owned business that sells 100% natural bathroom sprays to remove odors before it begins so you can “leave the bathroom smelling better than you found it”.

These products are well-known as the Poo~Pourri Before-You-Go Toilet Sprays.

They are neat little 2 – 4 oz spritz sprays, all natural with essential oils and no parabens or chemicals at all, and start around $4.95 without shipping per bottle.

Each products has a cute little name that maintains the hilarious vibe: DéJà Poo, Call Of The Wild, Woo Of Poo Scent, Potty Potion, etc. 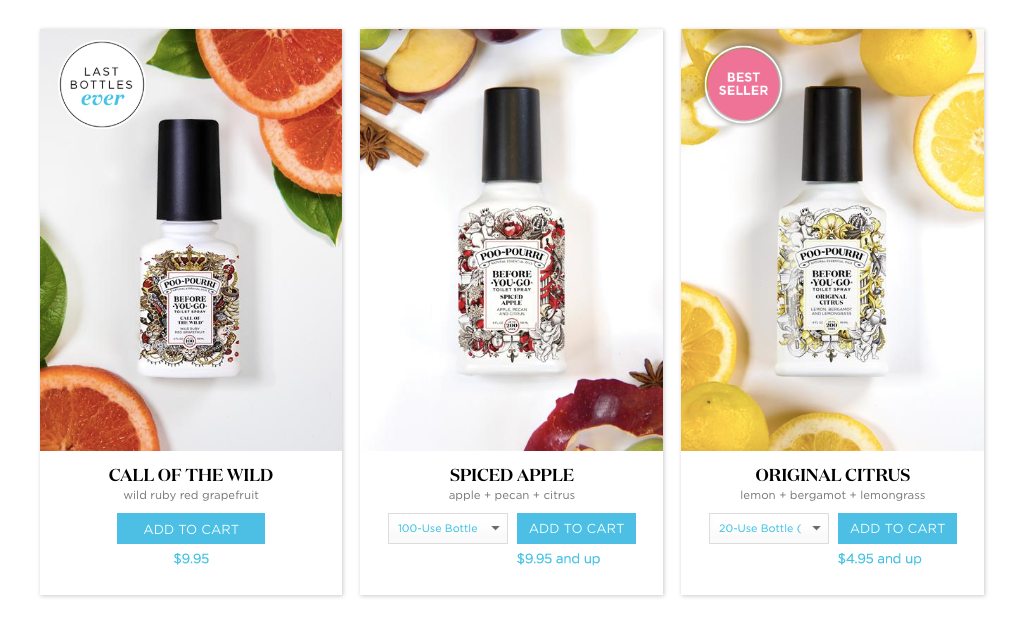 The founder & CEO behind this $400M empire is Suzy Batiz – an extraordinary woman who went from TWO bankruptcies to the boss of a team of 100 people at Poo~Pourri – and…a proud mother of 3. 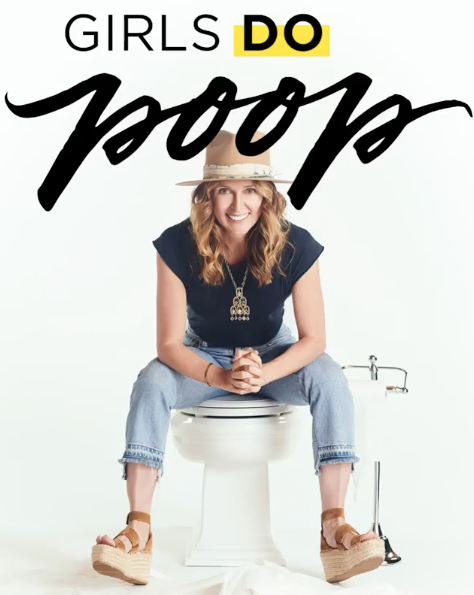 Suzy always liked working with essential oils and wondered if they could be used more effectively to remove bathroom odors than standard toilet sprays like an aerosol.

“The bathroom odors – it’s like a universal problem. Poop happens, and it stinks!”, she said, “let’s just get rid of poop odors, and then we can really solve the world’s problem”.

Her goal is to create a unique type of toilet deodorizers that work by creating a barrier and trapping odors when spritzed directly into the toilet bowl.

During her testing phase, her work became the main subject that everyone who visited her house was talking about at that time:

“My best friends and family would come over, and they would say, ‘I’ve got to go to the bathroom,’ and I would say, ‘What are you doing? What are you going to do in there? They use my toilet and test all products that I’ve made during that time.” – Suzy laughed.

The day finally came. One day, after nine months of trial and error, her husband walked out of the toilet and declared, “We are going to be millionaires!”

And then the journey of building a multi-million empire hit new high.

[Marketing lesson #1] Be bold wherever you go

That’s the core value behind every Poo~Pourri’s marketing strategy.

If there’s one thing Poo-Pourri doesn’t do, it’s tread lightly. Phrases like “dirty little secret,” “tiny astronauts,” “chocolate éclair,” and “heaping dump” are all over the brand’s advertisements.

While we know that the majority of those phrases are enough to make you blush, they’re also bold. 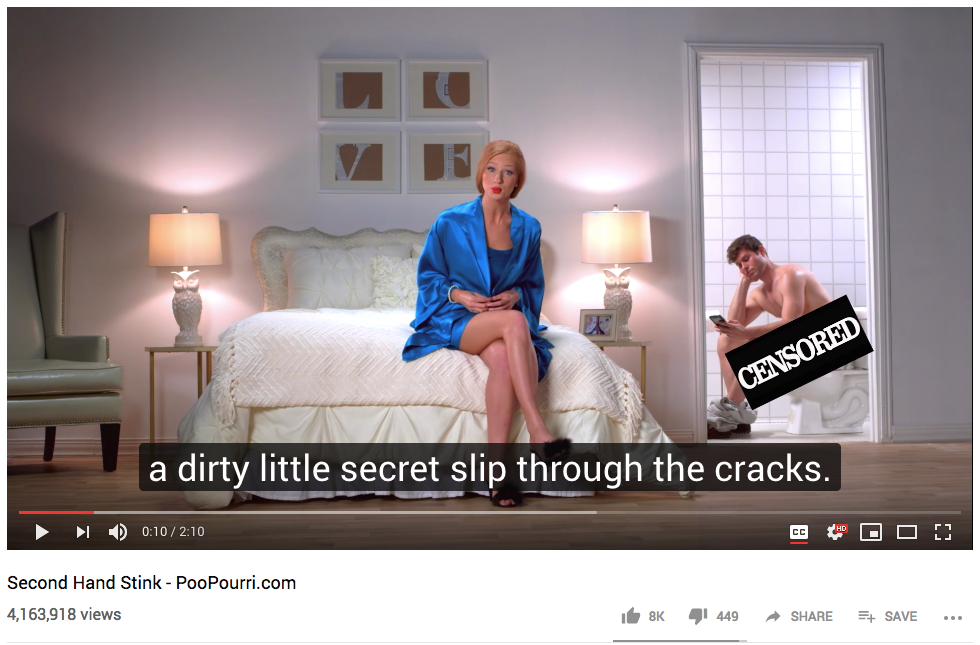 And the thing is: Poop is a topic that most people don’t want to talk about. Especially women.

Yet Poo~Pourri’s explainer video has gathered over 200 million views on all social channels. Twenty million units and counting sold. Wondering why? Because it got people talking!

Their shock content works, controversy sells, and having a strong opinion successfully sets them apart from other competitors. Unconventional? Yes. Brilliant? Absolutely.

Some might assume that the go-to brand ambassador for an odor reduction product would be a man, right?

After all, aren’t men are ideal for making hilarious advertisements about pooping stories? And women would never ever stink up a bathroom?

The face of Poo-Pourri isn’t a predictable man on a toilet. It’s a beautiful, sophisticated, and well-dressed princess who is, presumably, squatting on her porcelain throne.

Not only did they use a pretty face and a sexy British accent, they also had zero hesitation having her talk about the “creamy behemoth” she’s just “birthed” from her cavernous bowels.

This is the most unexpected thing that nobody is ever thought of when they start seeing this ad at the beginning.

It’s not random when Poo~Pourri choose the British redhead Bethany Woodruff to become their brand ambassador. They had done many in-depth researches about their customer persona before making that move.

It’s clear from the get-go that Poo~Pourri target customers who are definitely NOT everyone in the world. Not every Tom, Brad, Harry,…or any other man. They aim at young, eco-conscious females that are having a hard time talking about bathroom business and poop odors.

That’s the reason why the main character needs to be a proper young lady with a pretty face & upper-class accent.

A brand ambassador can make or break a business. Huge brands recruit celebrities to become their face, their voice, and their soul. We don’t need (and don’t have) that amount of money to hire an ideal ambassador, think about these two approaches instead: 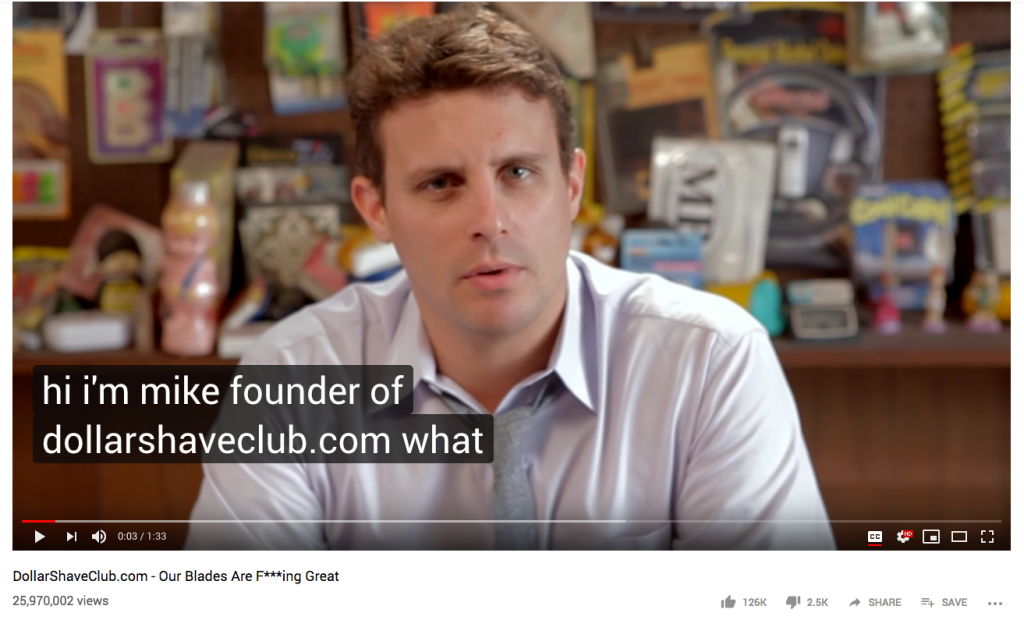 Founder of Dollar Shave Club, Mike Dubin, in their “Our Blades Are F***ing Great” ad campaign.

We once told in our Levi’s Growth Story that if you saw something works for your business, keep doing it. Levi’s stays true to their brand identity since 2011. And so does Poo~Pourri. 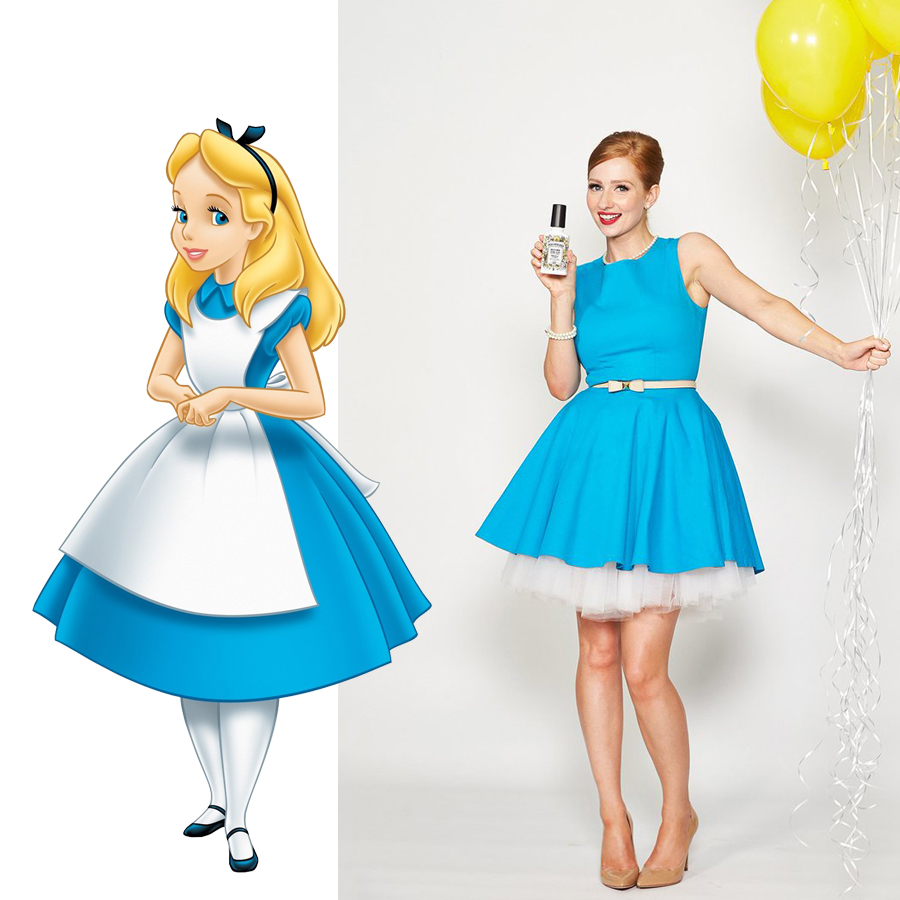 Do you see something familiar?

Do you see that? They’re both pretty, clever, well-mannered, skeptical – and the most important thing is – all females love them.

Poo~Pourri has been using the same lovely ‘Alice’ redhead lady since 2013 – and producing many videos with her since then. You can delight yourself in the crappiness of their entire channel, here.

Not only did they use the Alice in Wonderland theme on their ambassador, but Poo~Pourri also applied it on all their channels, including their website and of course – their products.

Head to the Poo~Pourri website and you’ll find a page that immediately resembles some magic from Alice in Wonderland: the design, from the font to the color scheme is decidedly elegant and playful – just like the main magical theme in that famous novel. 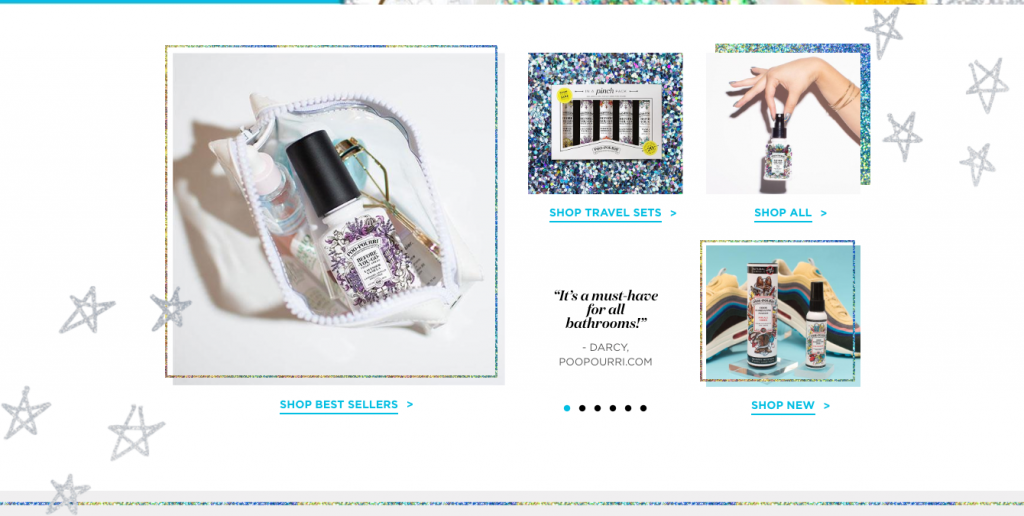 And, at first glance, the only thing that really clues you into what the product is all about (besides the name, of course) is the slogan beneath the brand’s logo: “Spritz the bowl before you go and no one else will ever know.”

That’s both hilarious & magical spirits are all placed in ONE slogan!

And if you first glance at a Before-You-Go-Toilet spray bottle, you will never know that beautiful bottle is a bathroom product…for pooping.

It comes with a nicely-packaged bottle that features a distinctly vintage & lovely appearance. 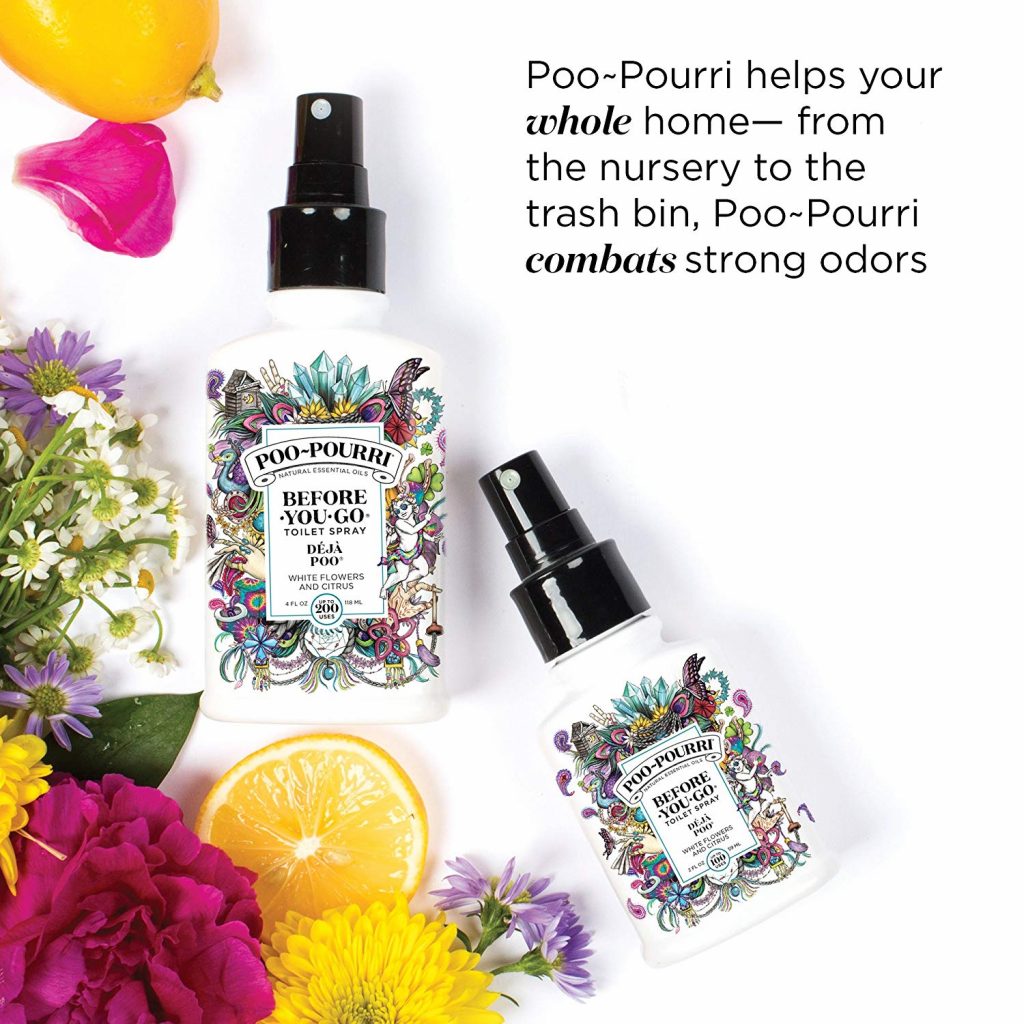 Just like the high-class French toiletries, these little bottles instantly make customers feel like they’re holding an expensive and exclusive product. When a product looks great and performs even better, it’s going to be a hit with customers.

Poo~Pourri No.2 collection with the classy and higher-end packaging

If you’re struggling to stand out as a brand, these are some lessons learned from Poo~Pourri: 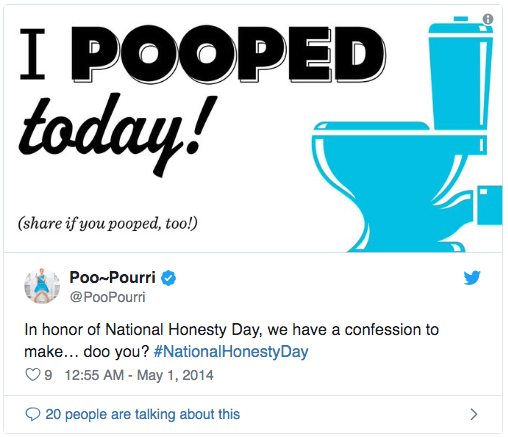 [Marketing lesson #3] Content is King. But Customer is the mother of King

But what we gonna say here is how they treat their customers like they treat poo… errr, by that we mean with a really positive attitude.

It’s not often when Poo~Pourri break their stylistic Instagram feed for an image, but when they do, it’s for a good reason.

On occasion, they will feature user-generated content (UGC) in the form of happy customers holding their products. For Poo~Pourri these images look far more down to earth and “real” than their typical ads.

Here is one example of this in action from Poo~Pourri’s Instagram: 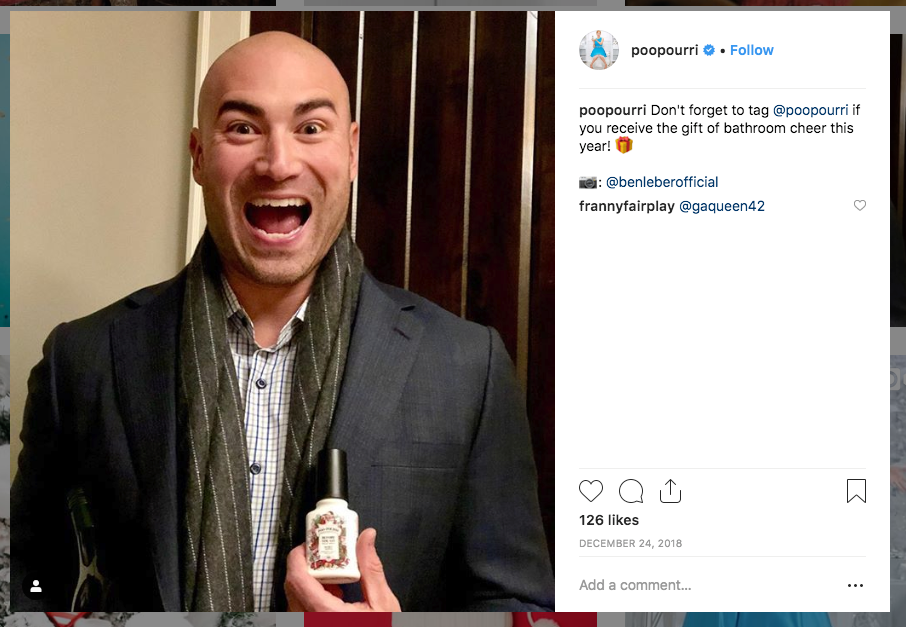 On Twitter, you can see that their customer service is excellent. While many brands answer customer’s replies with a robotic reply consisting of a generic customer care number or e-mail ID, Poo~Pourri’s replies are completely personalized.

The conversations with the brand were recognized and addressed with a light-hearted, problem-solving and again – hilarious approach. 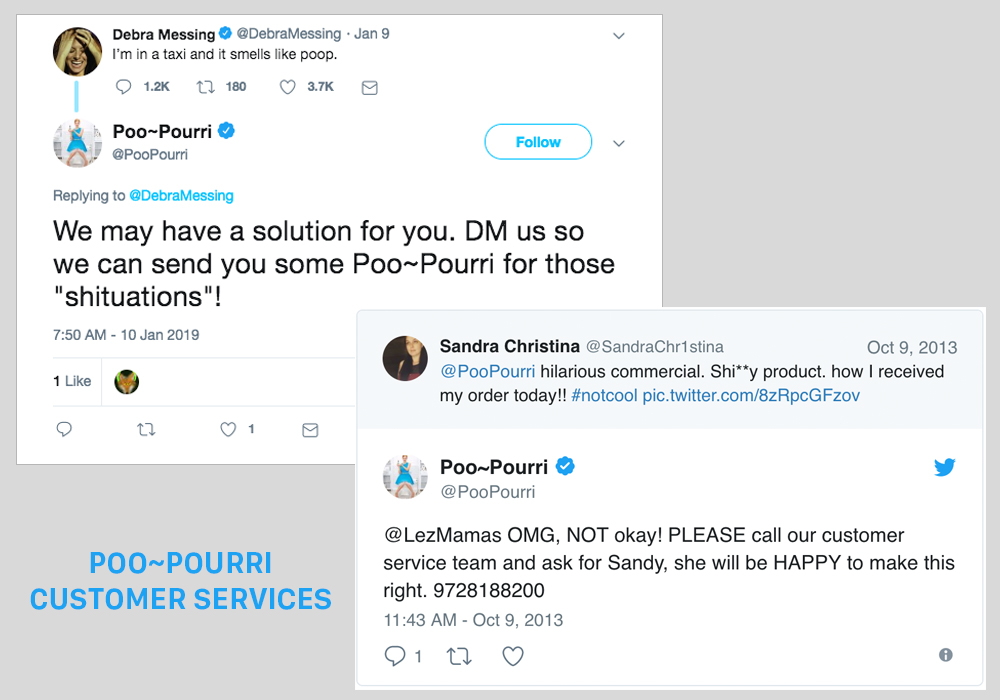 The brand was mentioned over 4,000 times on Twitter during a month. And they replied almost every mention with a timely manner. Over and above this, they even replied on weekends whereas many other brands have active customer service only on business working days.

Marketing is much more effective through the words of someone else (a customer) rather than you or your team.

That’s the motto from the team behind Poo~Pourri.

They never allow themselves satisfy with what they are having in present, they’re always seeking greater things: new growth and new creativity. Because after all, is that the future always better than the past?

And you know what – Suzy Batiz called her second bankruptcy is “the biggest blessing of my life,” because it forced her to downsize and focus.

“You know, you’re always going to be afraid,” she said, “but what happens is you keep getting up in the morning, showing up for work, because there’s a passion within you.”

Yes, there’s always a passion within you. Is that the reason why you started?