“Before MVMT Watches launched, I was a 21-year-old college dropout with more than $20,000 worth of debt to my name from previous business ventures. So regardless of age, regardless of financials, regardless of formal education and regardless of any other circumstances…  Hard work pays off, so continue the hustle and enjoy the process.” – said Jake Kassan, MVMT co-founder.

Started in 2013 with a simple problem, when Jake and Kramer – the two co-founders couldn’t find themselves a stylish and affordable watch to get out of school. They looked around and spotted a gap that most millennials couldn’t just drop $500 or $1000 on a watch, though people were still looking for high-quality timepieces at reasonable prices. The two men catched the idea and shared the same passion to solve the problem by creating great-looking yet affordable watches, which eventually turns out to be their majorly successful ecommerce business. How could we say so?

Well, in less than five years, MVMT has: 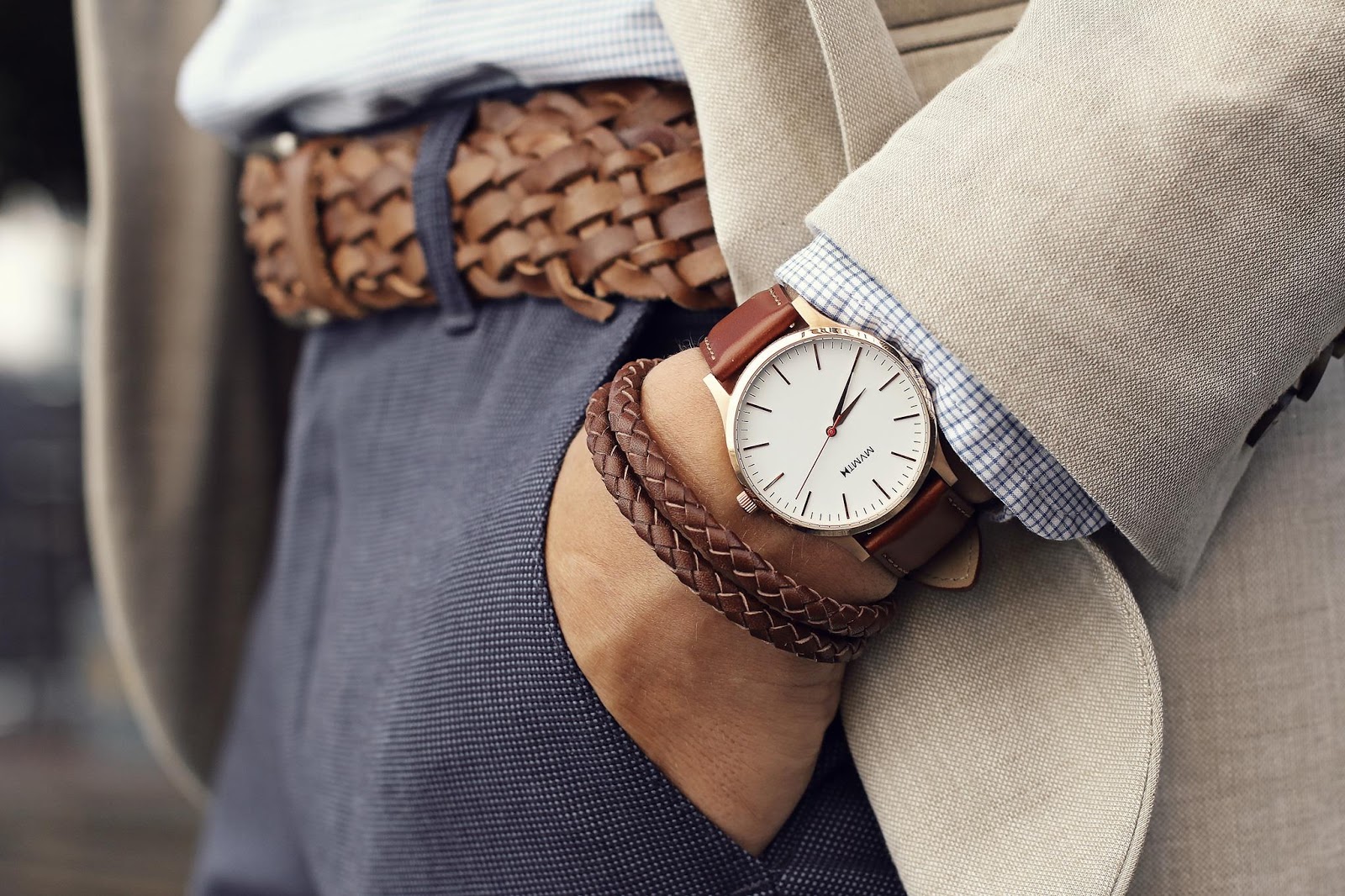 It’s quite an impressive growth in such a short time, however, let us get this straight. Being serial entrepreneurs, Jake and Kramer were not first-time players in the startup game. Jake started his journey earlier by selling T-shirts to teenagers, while Kramer found and grew a wallet store with a college friend. They dropped out of college eventually when the idea of MVMT hit them “with the dream of shaking up the watch and fashion industry” (as shared in their story). The interesting thing was that they built everything from scratch with absolutely zero funding from investors or venture capitalists, not to mention that Jake was working as a valet at that time to pay off his $20,000 debt.

Let’s dive in a few key things these two young men did to turn a dream into a reality, and how you can, too.

Back to the time when MVMT was still a no-name in the watch industry, it was such a challenge for the two founders to prove themselves and their brand among the well-establised, trustworthy and dominated giants like Rolex, Citizen, and Timex.

“We were the first ones (in the watch business) to sell directly online,” explains Kramer. “But we didn’t actually know it at the time that what we were doing was totally against the grain”. It has never been easy for customers to trust a brand new, online-only company, especially when that company was offering products at half or even one fourth of the price they were used to paying, and that the fear of being scammed was always there when people couldn’t see, touch or try the products themselves.

These are common problems for most entrepreneurs at the very first start of their businesses, how did Jake and Kramer cure the pain?

Their solution ended up shortly in one statement, which they conveyed it so well through all of their campaigns, “Style shouldn’t break the bank”. MVMT is dedicated to building quality, affordable timepieces, and based on the simple goal to change the way people think about fashion by delivering premium watches and accessories – at a radically fair price. 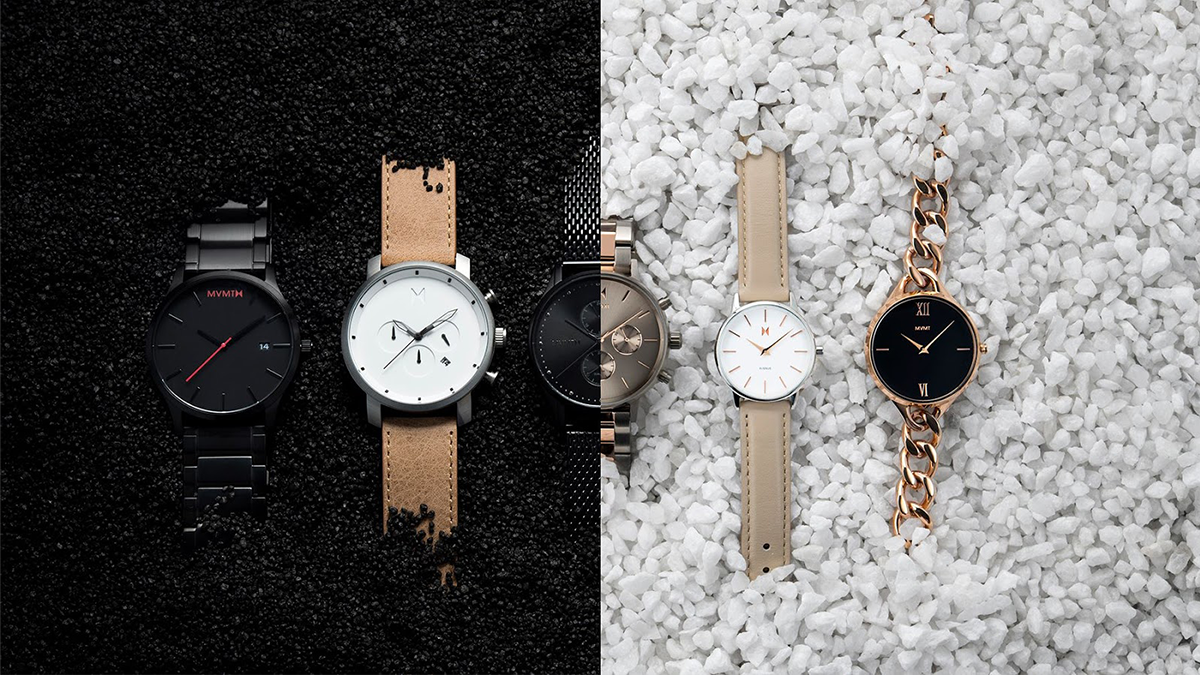 “The big watch conglomerates are struggling to do what we do, especially with Millennials,” Kramer explains to Forbes. “No one’s ever done what we’re doing in the watch business before in terms of building an affordable, accessible brand. We’re also the first ones to go to market totally online and we’re hitting the Millennial market through social media that’s hard for outdated brands to be relevant with. It’s difficult to reinvent yourself in the watch business. We started with a clean slate.”

They were able to deliver their promise because they cut out the retail markup. MVMT is the first watch company built on a direct-to-consumer model, which means all of their watches are designed, produced, marketed, distributed and sold by themselves. They bypass the middleman and connect directly to consumers, which allows them to offer the same quality watches for a fraction of the price of their competitors. 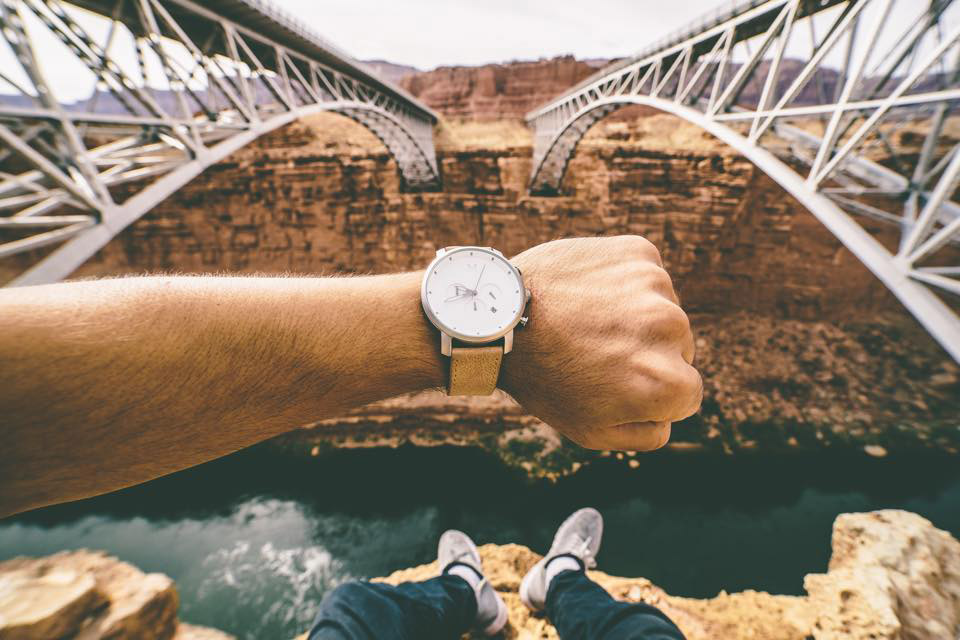 Through their five years of business, MVMT has proved that stylish and high-quality watches are accessible to anyone, and they have successfully set themselves as a global brand with 1.5 million MVMT owners (and counting) across 160+ countries. If you ever have any doubts on their product quality, MVMT offers a 24-month guarantee and free returns on all of their watches. It sounds awesome to consumers, yet a hard promise to any manufacturer.

Whether you look into MVMT’s website, blog, social media or marketing campaigns, there’s a noticable trend that you feel the “MVMT spirit” all over the places. As stated in their story, the brand’s ethos is “Dress with intent, live with purpose,” and it’s clearly that the content they create, curate from customers, and the images they share all reflect that. MVMT shows a consistent, classic, yet still fresh and energetic lifestyle experience in everything they own.

“Live life your way with style that suits your dynamic lifestyle
from work to play to adventures afar.”

They have successfully created emotions in customers with the brand. Looking into the MVMT images – people feel the youth spirit, however, we can also see the classical, elegant and luxurious, which makes the millennials – their targeted customers closely connected. 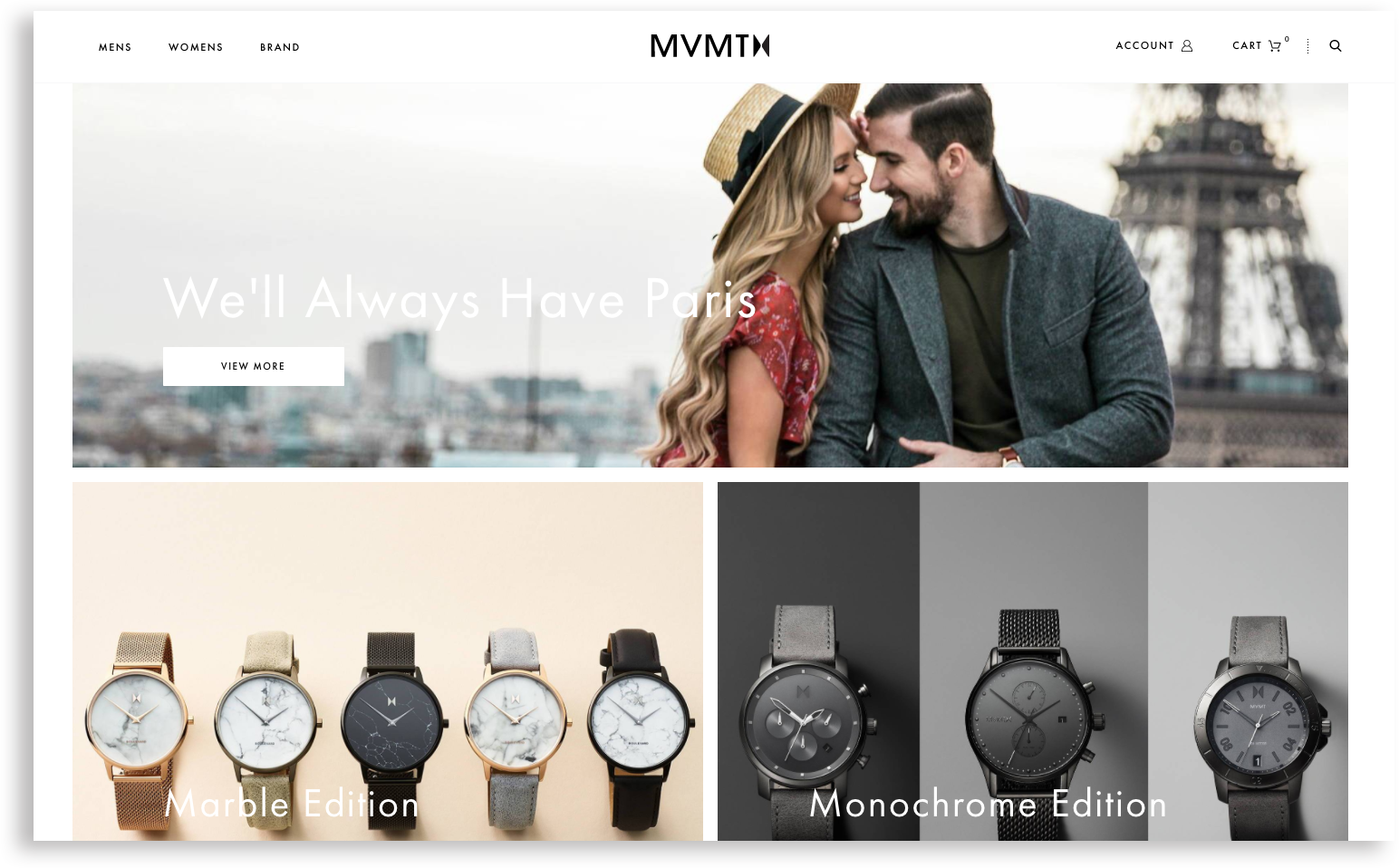 Consistency in MVMT’s images, look and feel on social media 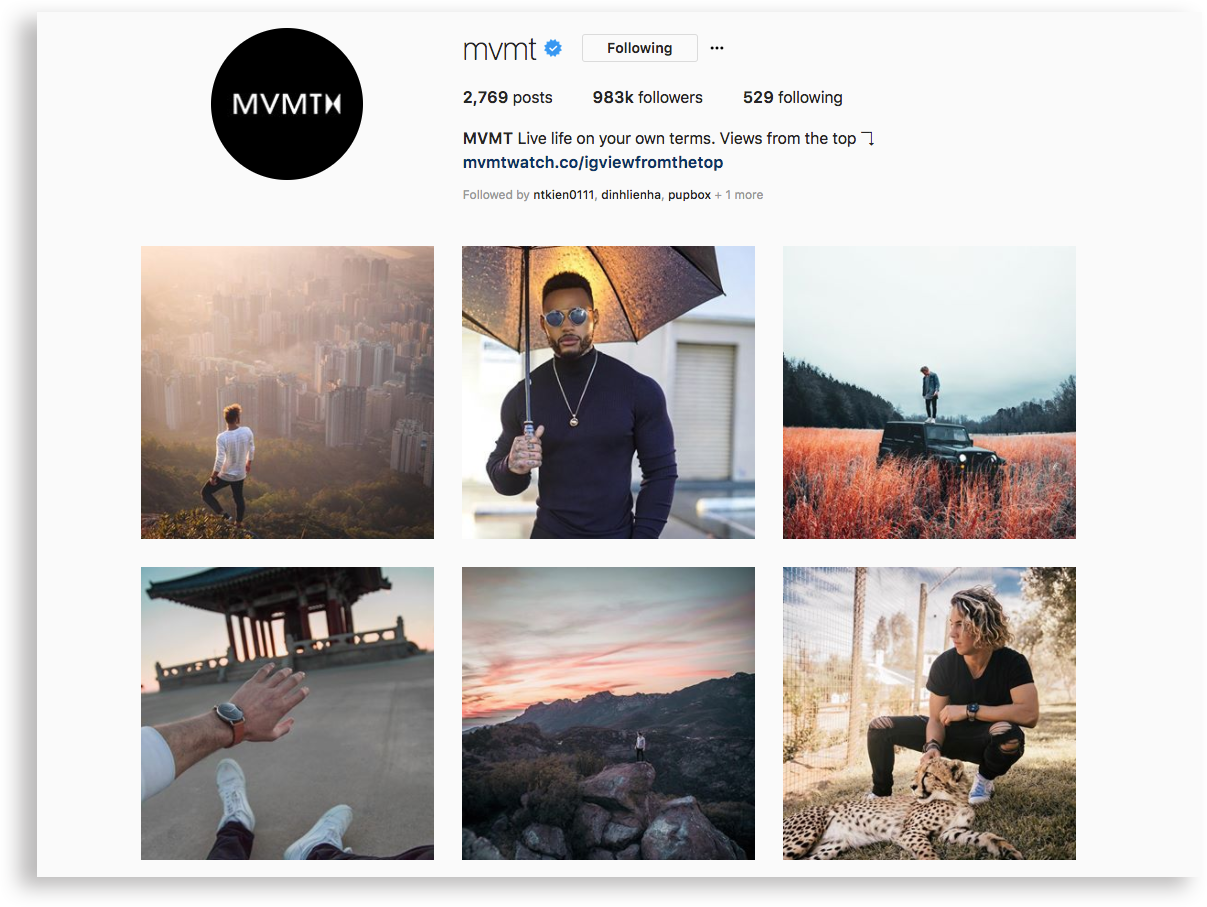 Their Instagram account is wildly filled with different adventures from their customers, however, all the pictures are curated carefully to match with the brand, and there’s a theme for all. The theme is not only for their Intagram, but it blends everywhere as well, from Facebook, Twitter to Youtube. 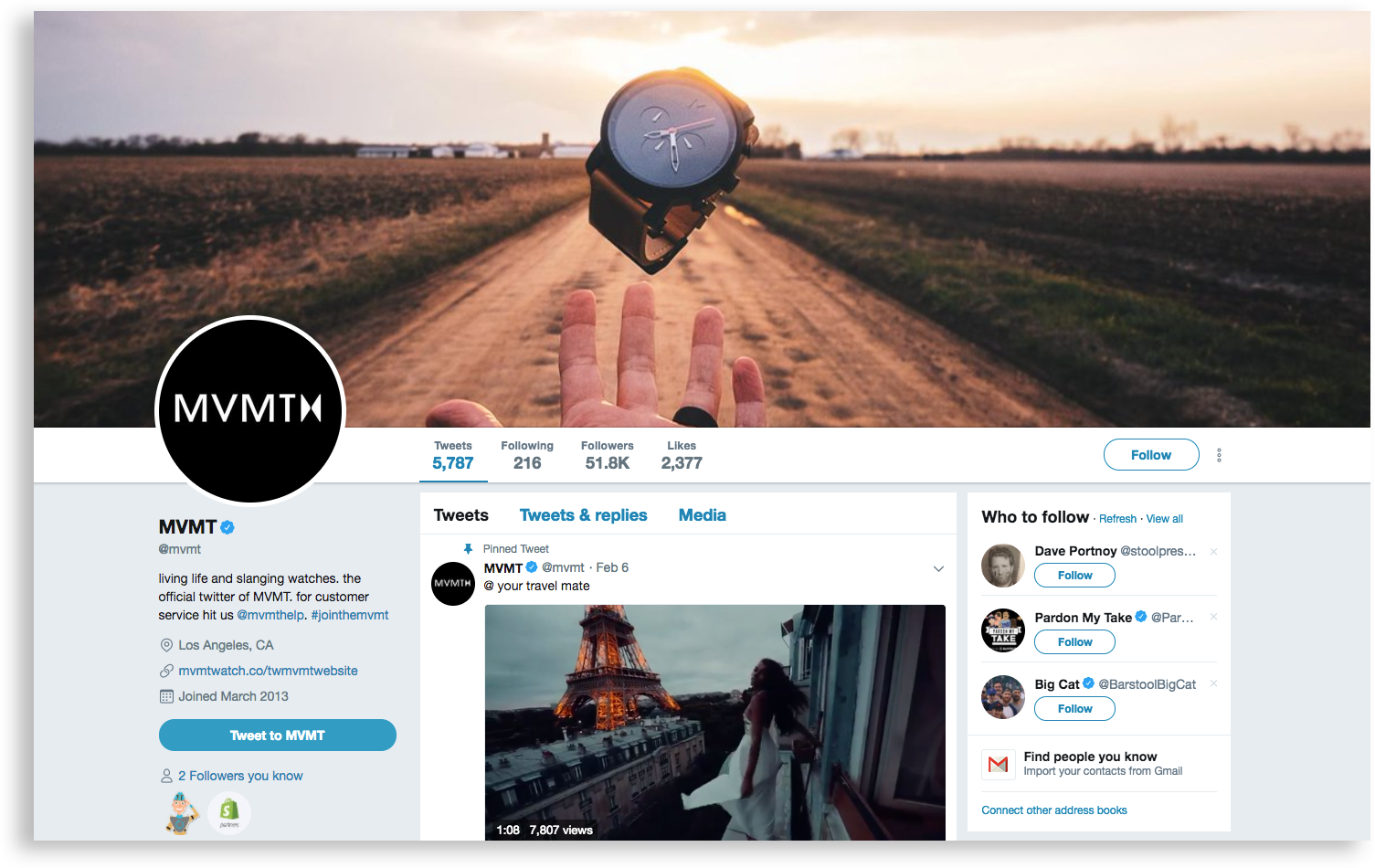 Whatever channel you are, you feel the same spirit – wherever there’s a watch, there’s a movement, which makes MVMT a top-of-mind product when the millennials think of timepieces.

Once created the interaction between you and your customers, making them actively contribute to your brand is the next important step that if you could cultivate it nicely, you would start a more meaningful conversation and plant a deep root into your relationship with them. That’s the exact reason why the #JoinTheMVMT hashtag was born, and it’s so successful that MVMT followers have contributed 86,736 posts on Instagram, thousands of posts on Twitter and Facebook. 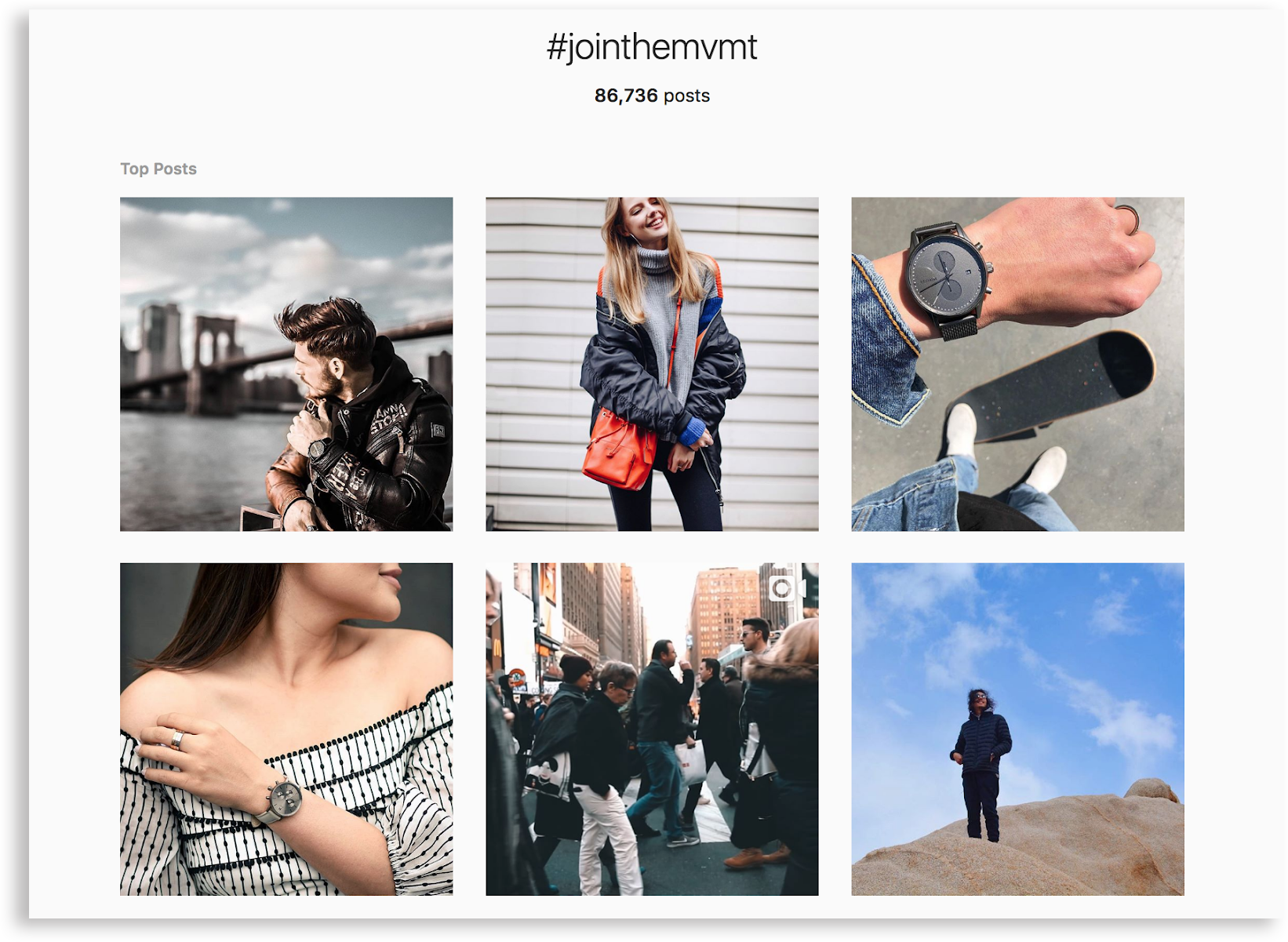 If customers post pictures of the MVMT watches with the hashtag, they will have a chance to be featured on MVMT’s feed. It’s not only a wonderful approach to connect with their customers, but it’s also extremely effective in curating content for MVMT, which is a powerful way to spread the MVMT brand to the world by personal recommendations. Moreover, it helps to drive sales as other shoppers can see the real photos of the products, especially when MVMT is online-based. 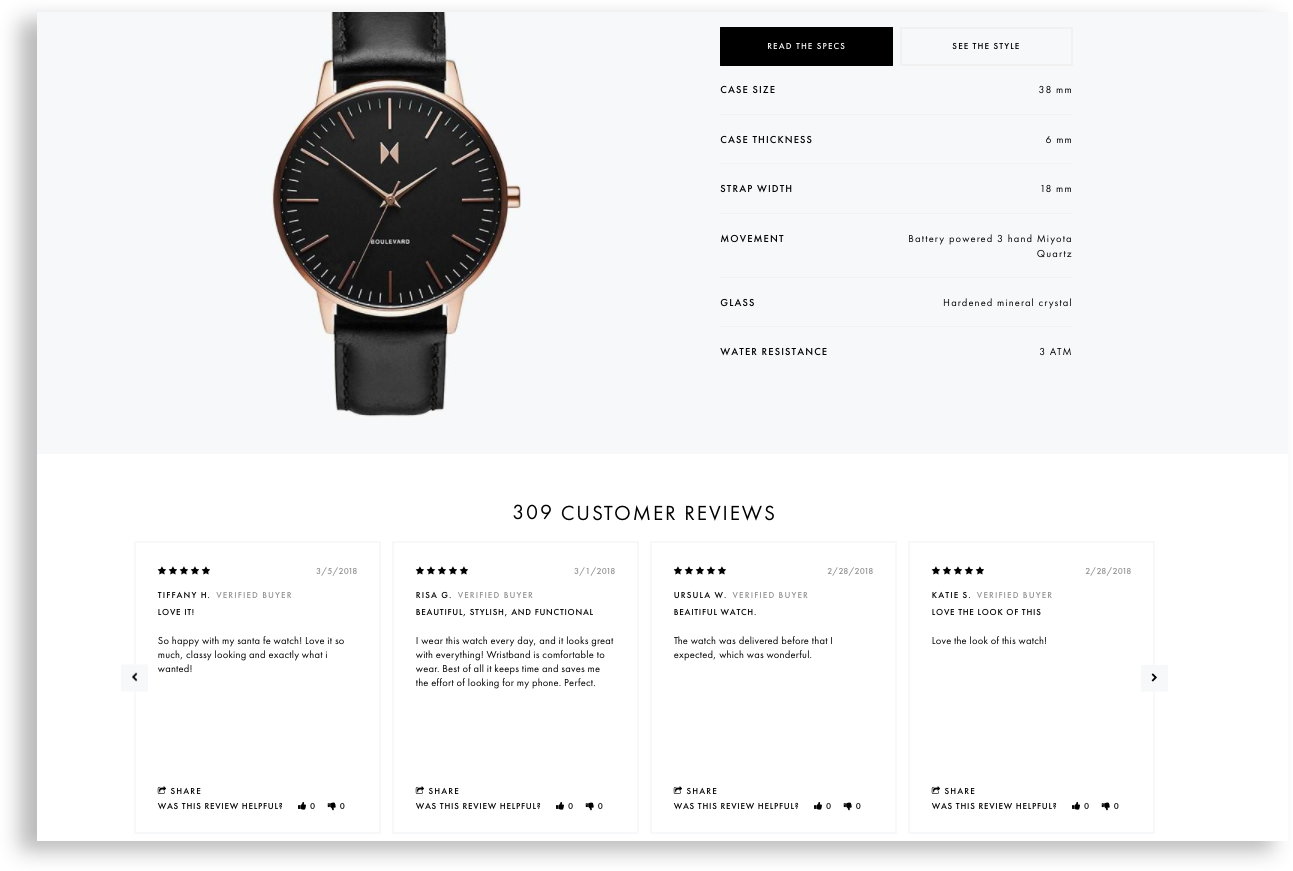 User generated content and customers reviews are always their priority not only to build the brand, but also to build trust for new shoppers all over the web.

Don’t you know that MVMT even has their own “Wall of Fame” to feature all the awesome looks from users all over the world?

Targeted influencers all over the world

Started with Intagram – where MVMT already had a massive following, they leveraged almost 100 influencers of all audience sizes to create different types of sponsored posts, with the potential reach estimated to 3.5 million people. These influencers get paid to feature MVMT watches in their posts with #JoinTheMVMT hashtag, usually with a unique coupon code so their referral influence on sales can be easily tracked.

For example, MVMT partnered with a blogger, a beauty and travel influencer – Stephanie Danielle who has more than 135k followers to make an artfully-captured video on her Instagram, showing how gorgeous she was in her MVMT new sunglasses. She also introduced a code “stephaniedanielle15” for her followers to purchase the look at discount, which allows MVMT to track the sales referred from each influencer. 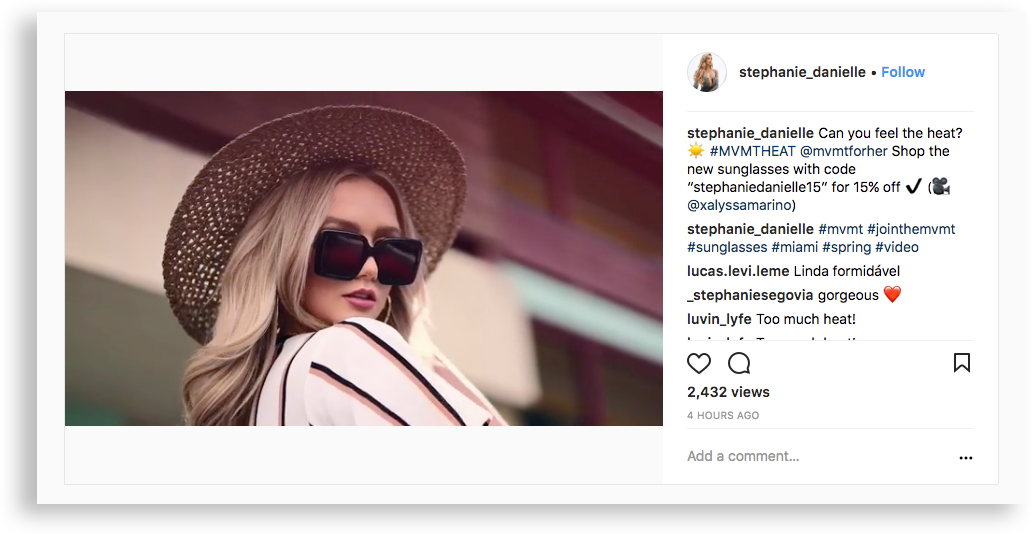 Not only Instagram, the brand’s strategy is to work with a wide range of micro-influencers in different countries and on different social platforms to cover as much impression as possible. Like a fitness influencer – Peter Kraus shared his bright smile and his MVMT watch with more than 19k followers on a Tweet. 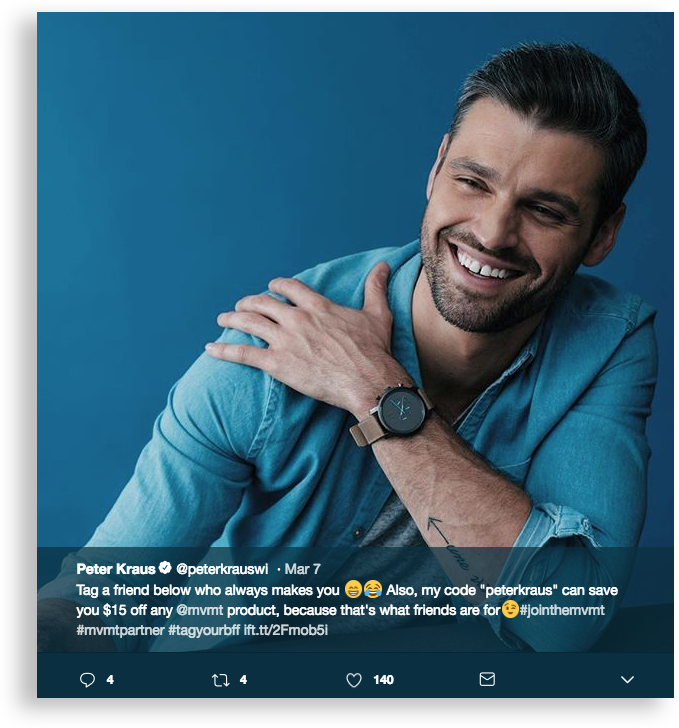 On YouTube, where the creativity isn’t limited within one picture or a 140-character tweet, MVMT even shares more inspirising stories via their influencers, take their campaign with Sam Kolder as an example. 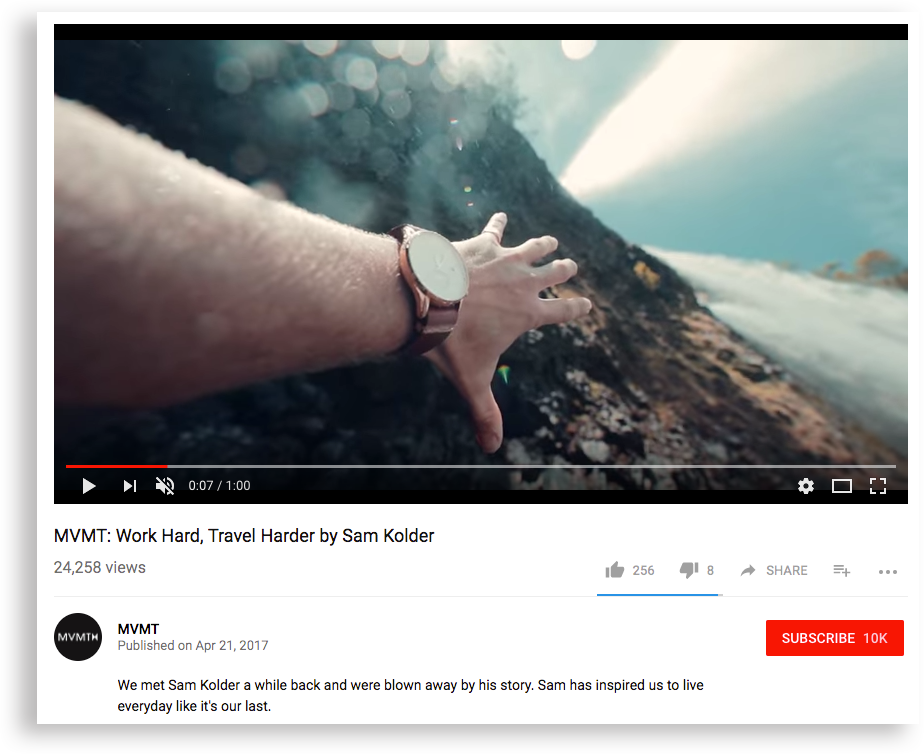 Sam is a lifestyle film maker with over 474k subscribers and 17 million views on his Youtube channel. His adventures are really inspiring, which matches perfectly with MVMT’s ethos – live everyday like it’s our last. Sam’s top picks are also featured on MVMT’s website.

The result? By working with high-engagement influencers from all over the world, across various lifestyle and fashion segments, MVMT is able to connect with followers in different countries, build trust, keep the brand on top of their mind and gradually convert them into buyers. Through the coupon codes provided, MVMT can track the revenue generated from each influencer and be able to decide to continue their campaigns with whom. It not only raises the brand awareness, but also engages the audience and encourages purchases from potential paying users.

According to Jake and Kramer – MVMT founders, their friends and family didn’t believe in their vision at first, they once told that building a purely online business in this industry was quite impossible. They proved themselves and made their dream come true by selling over 600,000 MVMT watches in the first three years, making over $50 million in revenue. In 2017, they were projected to hit $90 million.

Until now, MVMT has over 3 million likes on Facebook, over 1.5 million combined followers on Instagram, Twitter and Youtube – the majority of them are millennials, which makes it a powerful empire and hard to beat.

By building a strong brand, fulfilling the right needs of their target customers and utilizing all the key resources, MVMT has proved itself to be the fastest growing watch brand. They started from scratch (even from debt), they did it well and succeeded, so we believe any determined entrepreneur like you can, too. We hope their story will inspire your way to success, entrepreneurship is always a long but worth-riding journey.

Reaching 13% conversion rate with $0 invested in apps. Is this possible?

A $400M Empire: How Poo~Pourri Turns Bathroom Odors Into Sweet Smell of Success