Last Wednesday – the 15th of July, Amazon celebrated its 20 birthday by Amazon’s Prime Day – a sales event that was promised to be even bigger than Black Friday, exclusively for Prime Members. However, since the big day ended, #PrimeDayFail has become one of the most popular hashtags for the last 36 hours on Twitter.

Whether this is a failure or success, there are still some lessons that e-commerce sellers can learn to avoid on their promotion day. Here we would like to point out 5 ones worth your taking note of.

#1. Cliché but never gone old: Don’t ever deliver under your promise.

When they made it widely known on national TV channels and social media that Amazon’s Prime Day would beat Black Friday, the unbelievably low discount rates did shock most people who stayed up late preparing wishlists and praying for lightning massive discounts. What Amazon had promised got people up on their feet, all well-prepared and waiting and then they received things far below their expectations. 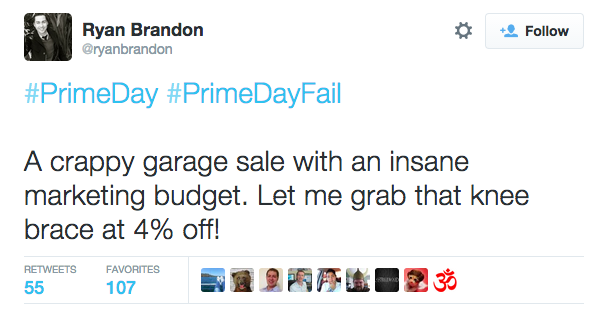 Looking back to the time when Amazon raised the price of Prime Membership from $79 to $99. At first they had hinted that the price might be increased by 40$. But then customers sighed a relief when it actually went up only $20. Amazon did such a great job in delivering more than what was expected. But this time, they have just carried out such a big fail on this lesson.

Word-of-mouth on social media these days is an edged sword. It can bring you up to heaven, but also can bring you down to hell. Never fail your customer’s expectations on what you promise. Instead, promise less, let your actions talk.

#2: Never bundle a package of products that customers don’t need.

As we all know, up-sell and cross-sell have been the 2 most successful tactics that Amazon applies to grow their business, in which shoppers will be able to buy a package of relevant items at a much cheaper price than buying each product separately. However, on this Primeday, customers witness a lot of bundles that are mostly “useless”, because those aim to make customers purchase more, but not at the competitive price it’s supposed to be.

Take a look at this GoPro HERO4 BLACK Prime Bundle for example. It contains of 6 items, which seems to support your GoPro at best, however, it turns out to be:

Promotion means to bring you more money, not more complaints. Therefore, don’t try to bundle everything you have – it won’t help to increase revenue, which, in contrast, might lose you a lot of potential customers.

Put yourself in customers’ shoes and think of relevant items that they (or you) really want to buy together. Don’t bundle products that you really want to sell, just because they’re slow to sell separately.

Amazon’s Prime members on average spend more than double with Amazon each year than non-Prime members, and they are also less likely to shop at other retail websites. Obviously, Amazon targets at their prime members as a key group of customers to focus on. But on this Prime Day, deals Amazon offered were not what the prime members want. Look at what they got at the cost of being all-nighters: 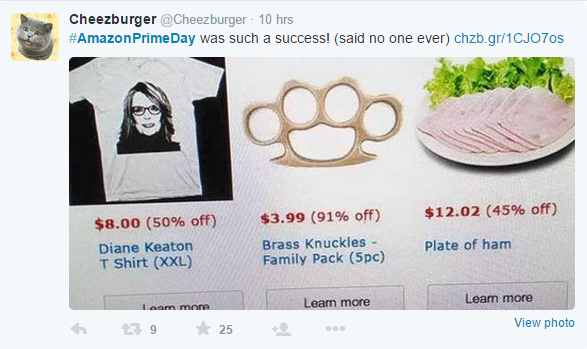 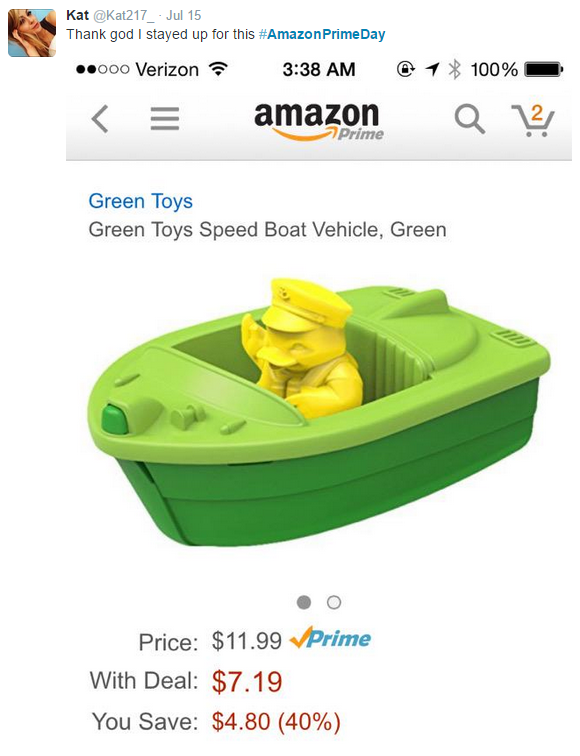 In e-commerce industry, it is well known that retaining repeat customers is much less costly than gaining new ones, which means hurting the key ones also hurts you an awful amount of revenue.

Your key customers deserve the best in everything. If you ever have an idea to grant them a special sales event, don’t make it like a stock clearance of your store, but give them exactly what they really want. They can become your voluntary ambassadors and lead valuable traffic to you.

#4: Stock your products enough to please the crowd

Have you ever been to a sales event that everything you’ve put on wish-list is just gone in a blink of an eye, which seems they don’t even have those products on sale!?

It turned out to be somehow what was happening on Prime day. One angry customer said the sale items sold out in seconds – even “a bunch of crap that no one wants…”

Don’t turn your promotion day into April Fool’s Day. Otherwise, the outcry will lose you a lot of new customers through negative word-of-mouth.

Stock your products enough to make sure your customers don’t have the feelings of being tricked. One happy customer brings in 10 potential shoppers, so prepare your store (and yourself) for all expected and unexpected situations.

Although Amazon’s Primeday receives quite a lot of negative comments from customers, let the numbers be the judge on whether it’s a failure or success:

Next Tuesday we will share some interesting lessons you can learn to outperform your promotion from Amazon Prime day, and reveal the actual myth behind why Amazon ran this Prime day (so “successfully”).

Do you want to be the first one to know? Let’s subscribe to Beeketing Blog, an email will be sent to you right after the myth is out!

(At Beeketing Blog, we send new posts to subscribers once every Tuesday on topics of marketing automation, e-commerce growth and everything in-between, FYI).

6 Common Mistakes Why Your Holiday Sales Did Not Take Off